In My great great grandfather was born to parents Wilson John Polk & Roseanna Howsley on February 17, 1835. He was born and raised on the family farm in Hardin County Kentucky. Albin was one of 11 children, the 4th child, and the 3rd of 6 sons.

At the age of 24, Albin married his first wife, only to lose her in childbirth in 1865. Together they had 4 children. His second wife, Amanda Ann Jenkins, was my great great grandmother. They married on August 8, 1866. Of this union they had 9 children.

With the exception of his service in the Civil War, Albin was a farmer like his father before him. He farmed in Kentucky, Missouri, and later grew wheat in the Oklahoma Territory. On August 14, 1862, Albin enlisted with the 9th Regiment Cavalry, Company G, Kentucky. Three of his brothers enlisted the same day – two of those brothers in the same Company. And like many families during this time, beliefs often tore them apart. One brother enlisted and served on the Confederate side. He was later captured; spent time as a prisoner; pension papers listed him as deaf and blind. He is not buried in the family plot. Albin’s Regiment took less than 3 weeks to recruit, organize, and muster into service with 1,244 officers and men. On August 22, 1862 the Regiment left Emminence, Kentucky and entered into their first campaign. They advanced toward Richmond, and, along with the 9th Pennsylvania Cavalry, their greatest service came as they covered the retreat of the Union Army of Kentucky. I mention this because the Battle of Richmond was one of the most decisive and complete Confederate victories in the war. After retreating to Shelbyville, they pursued General Braxton Bragg thru Kentucky. Bragg’s dream was to possess the entire state of Kentucky, and marched into the state of Ohio. On October 8th Albin’s regiment found themselves involved in the Battle of Perryville; 25,000 Union troops fought 16,000 of Bragg’s soldiers. By the end of the day more than 3,000 men from each side had been killed. The next morning the Confederates were gone. Late in October of 1862 Albin was promoted to Corporal.

By December 22, 1862, the 9th Regiment was sent after Brigadier General John Hunt Morgan. While pursing Morgan they encountered other battles such as Springfield, and at the Cumberland River. From July 2-26th they chased Morgan. Morgan’s antics coincided with the Vicksburg Campaign and the Gettysburg Campaign. His raid drew tens of thousands of Union troops away from where they were needed most. Bragg intended for Morgan to distract the Union soldiers. But Morgan had his own agenda and took the opportunity to raid Kentucky and Ohio citizens of 8,000 head of cattle, 50,000 barrels of pork, 4,000 horses, millions of yards of Kentucky cloth. He captured and released over 400 men from the 20th Kentucky infantry and stole 2,000 smoked hams. The hams were eventually thrown out as they began to draw flies. These hams left on the road left a trail for the Union Army to follow The Regiment was sent back to Emminence and were mustered out on August 22, 1863. Albin’s mustered out papers show he wasn’t paid much for his sacrifice. The Regiment lost 5 enlisted men, 1 officer, and 101 men by disease.

Albin cannot be found on the 1890 U.S. Census Records. Most records from that year were destroyed. But sometime time between 1880-1890 Albin and his family moved to the Oklahoma Territory. Did the Oklahoma Land Rush contribute to this? Possibly. In his later years Albin farmed in the Piedmont and Frisco areas of Oklahoma. Newspapers described him as a respected neighbor and successful farmer. He lost Amanda in 1905. Between 1920 and 1922 Albin left Oklahoma and moved to Benton County, Arkansas to live with his oldest daughter. He died at age 87. He is buried next to Amanda at Spring Creek Cemetery in Oklahoma. 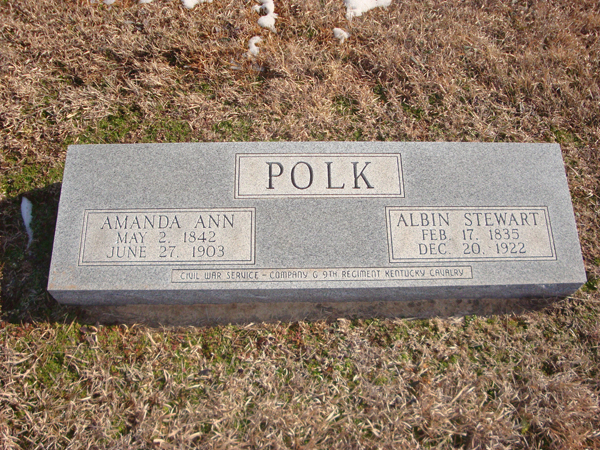