When Gad was a teenager, his family moved to Ripley Township in Huron County, Ohio. On April 20, 1861, Gad and his younger brother Joseph enlisted from Ohio in the Civil War. Both served the entire four years and were members of the Grand Army of the Republic. Although the average height of the Civil War soldier was 5’5″, both brothers surpassed this statistic, as each was 6’4″ tall!

Gad married Jane Holmes, who came to Ohio from England with her family in 1850. They were married on February 3, 1857 in Ripley Township. After Gad’s service in the war, they moved to southern Indiana, where one of their children, my grandfather, James Franklin Gleason was born on May 8, 1869.

Gad was a farmer, painter, wallpaper hanger, fisherman, newspaper owner, and writer. His pension papers reveal that he had an India Ink tattoo on the instep of his left foot! Legend has it that he sailed the seven seas and even fought in the Crimean War.

Gad died in North Vernon, Jennings County, Indiana on November 13, 1913, and he is buried in Greenwood Cemetery in Michigan City, Indiana.

Drifting along in the evening gray,
Down with the tied to the outer bay,
Away from the forest’s sylvan bowers,
The quiet nook and the wildwood flowers.
From the shady bank where violets grew
Has floated this wreck of an old canoe.

Soft with decay the wood has grown
Of the old canoe as it drifts along.
Those who once in the bark took pride
Have left it to drift away on the tide.
Dropping a tear or heaving a sigh
As their thoughts return to the days gone by.

Drifting along by the river’s bank,
Pass the rush is wild and rank.
Down with the tied to the outer bay,
From the home of the loved ones far away.
Here is the one who in bygone days
Strayed from the light into darker ways,
Now far from home where the roses grew
Drifting a wreck, like the old canoe. 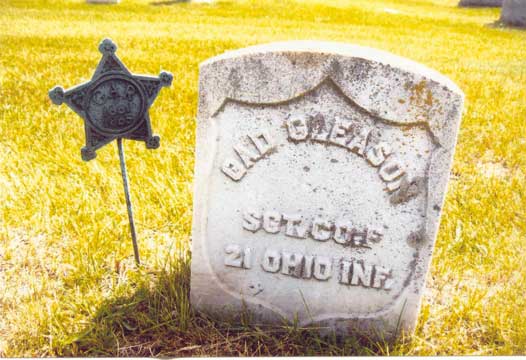