Garland Shackelford was born January 26, 1816, near Danville in Pittsylvania County, Virginia. He arrived in Springfield, MO, on June 17, 1840. By 1842 he had married Mary Forren, a native of Tennessee. Their thirteen children included six sons and seven daughters. One daughter, Martha A. (Mattie) Shackelford, married Daniel Wesley Robertson, a Union veteran, profiled elsewhere on this Honor Roll. Mary Shackelford died January 14, 1892. Garland Shackelford’s second marriage was to Mrs. Ellen Hicks in November, 1893, in Greene County, Missouri. They had no children.

In 1857 he moved to Marshfield in Webster County, Missouri, where there was a great demand for builders. On June 2, 1861, “Garlin” Shackelford enlisted in Webster County Home Guard Volunteers, Company C under Captain Robert L. Butts. He was mustered out August 28, 1861, after the Battle of Wilson’s Creek campaign.

Garland Shackelford died at age ninety-two on July 8, 1908. He was a member of the Masonic Webster Lodge #98 for forty-four years. At the conclusion of the funeral service held at the Marshfield Methodist Episcopal Church, South, where he had been a longtime member, Webster Lodge escorted his remains to the city cemetery and laid him to rest with the honors of the Order. Garland Shackelford and his first wife, Mary A., are buried in Marshfield Cemetery in Marshfield, Webster County, Missouri. 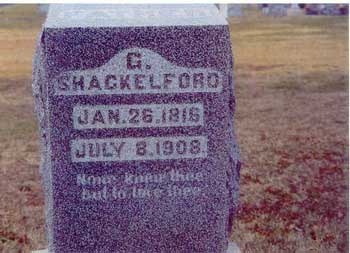