John Greer Knox, son of Joseph and Lovisa Davidson Paxton Knox, was born January 15, 1833, in Giles County, Tennessee. He was the grandson of Samuel Knox, a Revolutionary War patriot.

On October 14, 1855, J. G. Knox married Elizabeth Salena Locke, daughter of William Lewis and Nancy C. Locke. The newlyweds emigrated from Tennessee to Greene County, Missouri, and settled on a farm near Willard, a small community not far from Springfield. There they became parents of nine children–six boys and three girls.

There are two service cards on file for J. G. Knox in the Jefferson City, Missouri, archives recording his service in Co I 72 Regt EMM under Capt. John B. Perkins as: April 3, 1863—October 21, 1863, and May, 1864—November 14, 1864. Unfortunately, records of the EMM have not been well-preserved, and a muster roll documenting members of Capt. Perkins’ unit between April and October, 1863, is missing. It was during this period, however, that troops were mustered to defend Springfield, Missouri, from attack by Joseph Shelby’s confederate cavalry. There is a muster roll, including J. G. Knox, in the Jefferson City archives documenting his period of service between May and November, 1864, when troops were again mustered to protect Springfield and its supply depot from Sterling Price’s confederate cavalry.

In 1867, while searching for his prized dog, Juno, who had disappeared when out hunting, John Knox and his oldest son, Joseph William, discovered a cave on the Knox farm. Initially, the cave was known as Knox’s cave. Through the years ownership of the property and the name of the cave have changed several times. Today this major natural formation has become a well-known commercial tourist attraction.

Elizabeth Salena (Locke) Knox, who was born September 7, 1832, in Giles County, Tennessee, died July 16, 1879, in Greene County, Missouri. Mrs. Diana Hughes, a widow with children of her own, became John Greer Knox’s second wife on October 16, 1879. Together John and Diana Knox had two children, both of whom died young.

J. G. Knox was a charter member of the Walnut Springs Cumberland Presbyterian Church and was an elder in the church from its organization until his death November 2, 1891. He is buried with his first wife, Elizabeth Salena, in Murray Cemetery, a Greene County historical site, in Willard, Missouri. His tombstone is inscribed, “IN MY FATHER’S HOUSE ARE MANY MANSIONS”. 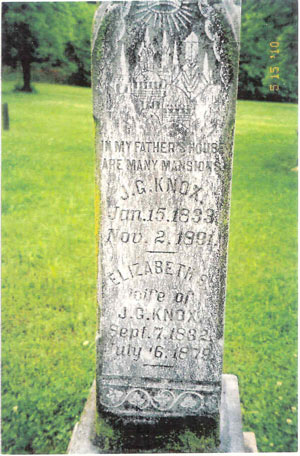