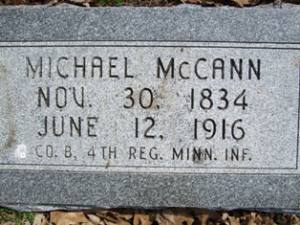 Taken from Kansas Saplings by Beatrice (Betty McCann) Messer:
“…Mike McCann came to America when he was about 21 years old. He was a stevedore on a ship on the Mississippi River before the Civil War. Steve, his uncle, found Mike there and borrowed money from him. Mike served in the Civil War, fought at the battle of Vicksburg under General Sherman. He was wounded but refused treatment. He was mustered out in Minnesota and was married there. He got a huckster wagon and with his family started traveling to find Steve. He found him on a farm near Gardner, Kansas. Mike evidently got part of the farm… ”

Michael McCann was born 30 Nov 1834 near Newry, Co. Armagh, Ireland. He died 12 Jun 1916, Gardner Twp, Johnson Co., Kansas. His first marriage was to Anna McGraw, born 1842 in NY. She died in 1884, and buried in Gardner cemetery in Gardner, Kansas. Michael McCann’s second marriage was on 09 December 1889 at Olathe, Kansas to Luvina Wilmuth Cleek, who was born 13 August 1857. Mike McCann …could neither read nor write. His second wife taught him to write his name. When he died, he owned 540 acres of land near Gardner, Kansas.